The late-fall muskie peak is upon us, so it’s the perfect time to head to the mailbox and answer an interesting question from a reader who’s having trouble staying connected to the big toothy critters.

Our friend writes in and says: “For some reason, I have a hard time keeping muskies on. I sharpen my hooks often. I use a no-stretch line, but I keep the drag somewhat light so I don’t rip the hooks out. The rod that I am using is a seven-foot heavy action. I’m using bucktails mostly, and some crankbaits. It seems like when I set the hook on a fish, I have the worst time “catching up” with it. I’d like to know what I doing wrong, since I don’t have this problem with other fish and equipment. Thanks for your time.”

I responded to the reader telling him that I thought his tackle decisions were reasonable. For sure, I think he would enjoy using a longer 8-, 8.5-, even 9-foot rod, in order to achieve greater casting distance and better figure-eight control at the side of the boat. I started using a 9-foot Shimano SKIXX rod this year and it is brilliant. The extra length lets me figure-eight in ways that I haven’t been able to with shorter sticks. Having said that, however, I’m not tall, so I think that if I scaled back just a bit to the 8’ 6” model, it would be the perfect length for me. Still, having said all of this, I don’t think the length of our reader’s muskie rod is his problem, nor is the heavy action. 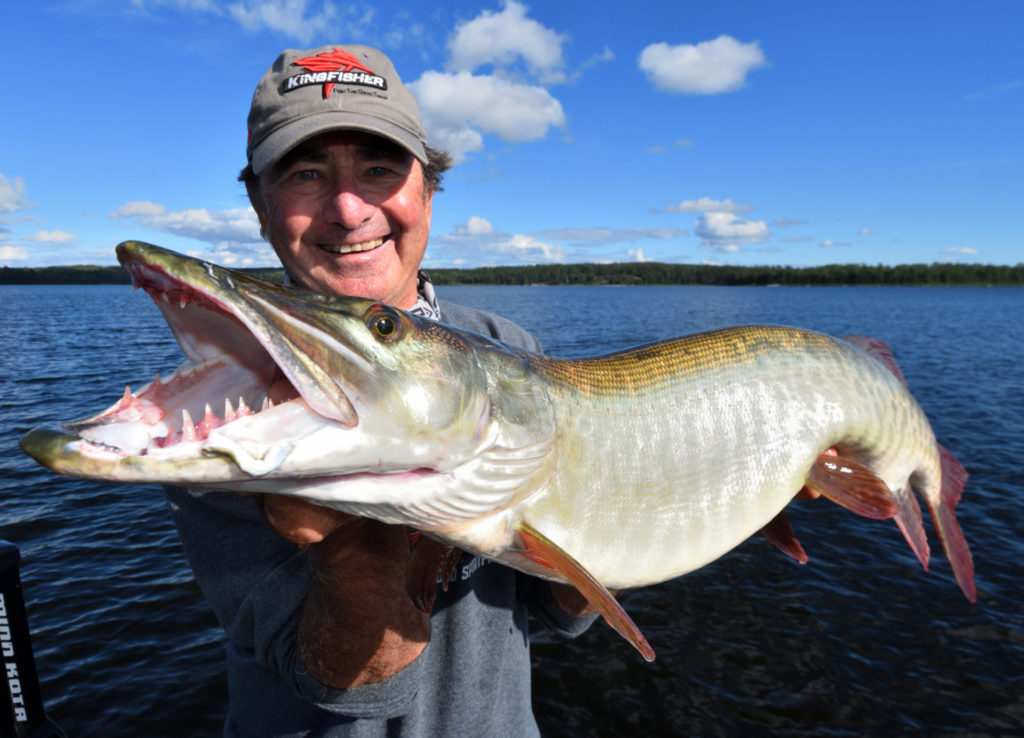 He mentions, for example, that he likes to fish with bucktails. So if he’s throwing the double bladed 9s, 10s and 12s that are so popular these days, a lighter stick would flex and bend too much and he wouldn’t get a good hook set. So a heavy rod should be fine. Ditto, using a low- or no-stretch line, which is the rope of choice these days for most muskie anglers.

Even better still, our friend says that he sharpens his hooks regularly, which is often the most important detail that a lot of anglers overlook. So, why is he missing muskies?

As I mentioned to him, I was confused by his comment that he was having trouble “catching up” with the fish. That implies to me that he may be using a reel with a slow gear ratio. But a 5:1 or 6:1 ratio is usually perfect for bucktails, especially the big thumpers that can wear you out when you pull in too much line with one turn of the handle, and I am not aware of many reels that are significantly slower than this. So, I don’t think his reel is the problem, either. Indeed, when I sting a muskie, the fish typically swirls and shakes its head violently and tears away from the boat—not toward it.

Which brings us to the drag. Our friend says he sets his “somewhat light so I don’t rip the hooks out.” Many anglers do this—mistakenly I believe—when they use braided line. They are trying to compensate for braid’s lack of stretch, but are actually over-compensating. Even when I am using braid—which is most of the time—I screw down the drags on my reels, and keep them tight. Much tighter, I bet, than our friend has his set. In fact, it takes considerable effort for me to pull out line when I have the drag the way I like it. I’m also a firm believer in setting the hook only once when I am muskie fishing. I shudder when I see folks in the boat with me repeatedly hitting a fish two, three or more times. When you’re fishing with a medium-heavy or heavy action muskie rod, fresh braid and razor sharp hooks, once is enough.

And if I hook a particularly big muskie or pike that I think is going to overpower my drag, it is an easy task to loosen it slightly or hit the freespool button and use my thumb. Indeed, it is a lot easier to loosen the drag on a well hooked fish than it is to call back a big toothy critter that you missed on the initial strike,  because you set it too loosely.