Most of you are too young to remember The Cisco Kid television show that aired in the mid-1950s, but it was the first series I can ever remember watching as a little kid, on a snowy black and white screen.  Cisco and his sidekick, Pancho were good guys, albeit desperados—the cowboy versions of Robin Hood and Little John—and the show ended every week with one of them making a joke. They would both laugh hilariously as their horses reared up on their hind legs, wave their hats in the air and yell “Oh, Cisco! Oh, Pancho!” as they rode off into the sunset

To this very day, whenever I see an image like this one, which appeared on my Humminbird Helix 12 recently, no matter where I am or who is with me in the boat, I holler “Oh, Cisco! Oh, Pancho!” Trust me, over the years, I have received some mighty strange looks. Nevertheless, it tells you everything you need to know about my reaction when I spot a school of ciscoes (often referred to as tulibees and herring), around a spot where I am fishing for muskies. 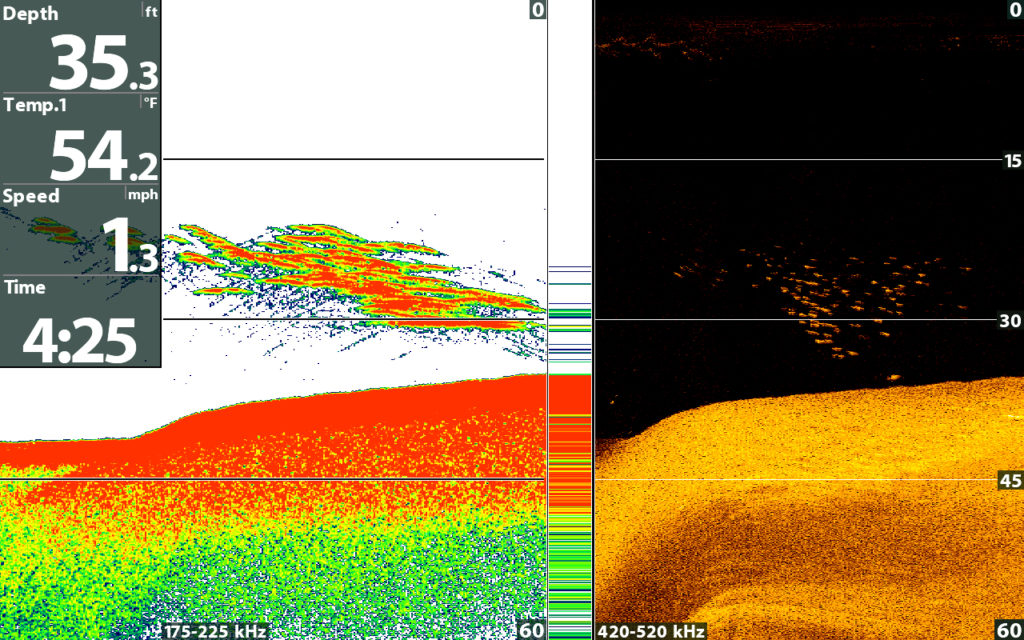 Now, it’s also possible that this is a school of whitefish because they appear to be decent size, even if our wide-bodied ciscoes often approach 16-inches in length. They were stacked up offshore of the shoal I was fishing, the very same spot where my grandson, Liam caught a 50-inch muskie last fall. Ciscoes and whitefish spawn on the same wave-swept rock, cobble and gravel sites in the fall—they return to the same spots year after year—once the water temperature dips below 6 °C (40 °F).   It’s still currently two or three degrees warmer than this in our local lakes right now, so the spawn is another week away. But when it peaks, in mid-November, so will the muskie and pike bite.

The big fish patrol the coregonid spawning grounds and pounce on wayward whitefish and herring as they come into the shallow waters to lay their eggs. It has long been thought, too, that the soft-rayed silvery forage fish spawn only at night, but recent research has shown that’s not always the case. As I can verify with my personal biggest muskie ever, a fish I caught many years ago that calculated out (based on length and girth measurements) to weigh 57.5 pounds. I am certain it wasn’t quite this heavy, but whatever it was, it was  gargantuan. And when I slid my hand under her belly to lift her out of the net, I could clearly feel the outline of a large prey item that she had just devoured. A whitefish I suspect that was easily five or six pounds in weight. Which prompted me to cry out in ecstasy, Oh, Cisco!  Oh Pancho!