I am betting that the summer of 2020 is going to go down as one of the hottest ever, maybe even the warmest on record. Ten days ago, we pulled onto a beach on Lake of the Woods to cool down and go for a swim and the surface water temperature on my Helix 12 was 86°F. I have never seen the main lake this warm.

My buddy John Monteith, who runs Fish Hunters Guide Service and spends part of his winters each year in the Caribbean and/or Hawaii, was also out on the lake that day. “I’ve never felt the water in Aruba this warm,” he later told me. 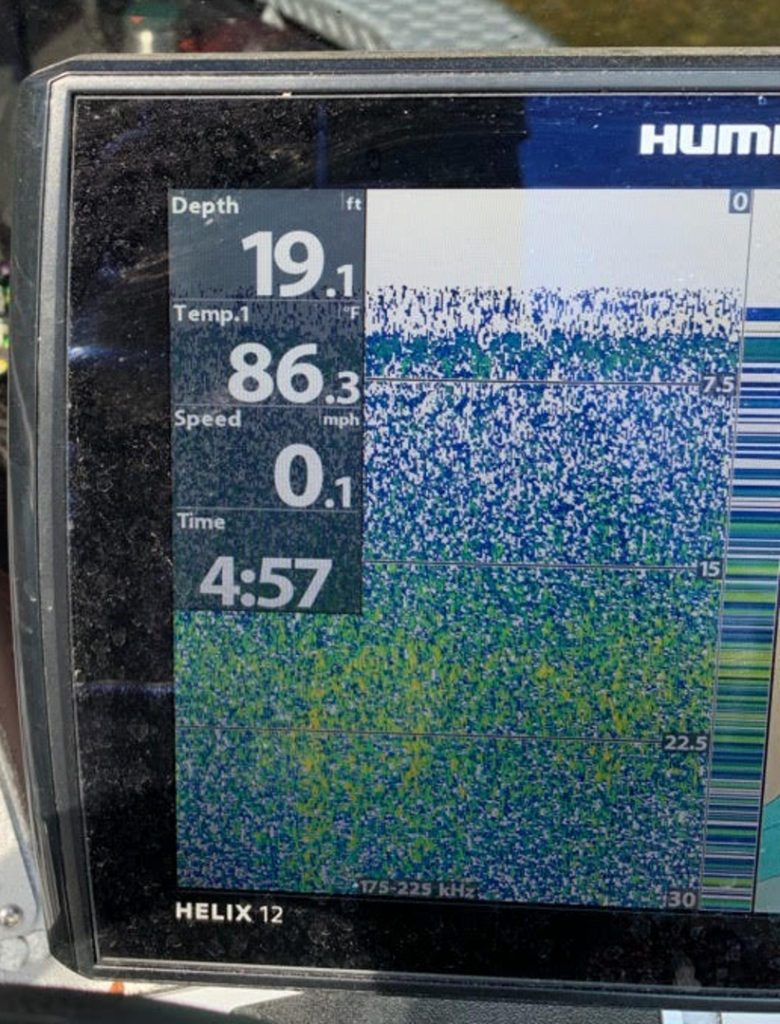 With the bright skies, scorching sun and flat calm conditions, you would think the walleye fishing would be poor and restricted to the early and late day hours. And yet the fish have been biting like crazy. Notice I said biting, and not necessarily feeding. There is a difference.

Indeed, Liam and I were out recently at high noon, the hottest part of the day, and it was harder to keep the fish off our lines than on them—provided we did two things. The first was to follow the shade line as it progressed over the course of the day, as the sun travelled across the horizon from east to west. Before lunch, for example, we were fishing along the slope and off the tip of a long underwater point that resembled an outstretched finger. At noon, we pulled onto a nearby beach to eat lunch and go for a swim. When we returned to the point an hour or so later, I stopped the Kingfisher on my earlier waypoint and didn’t see a fish on the screen. But, when I moved around the tip of the finger to the shady shade, the walleye were bunched up like cows under a tree. They had relocated maybe 150 feet.

As most anglers know, walleyes are negatively phototactic. They hate bright light and see better in dim lighted conditions.  In fact, I remember good friend and OMNR colleague Dr. Peter Colby, who headed up our walleye research unit, telling me that when he held captive walleye at the research station, they would quickly develop cataracts if they couldn’t shift locations and get out of the light. So it pays to be on the shady side of the street.

And as I mentioned earlier, it is also a good idea to differentiate between feeding fish and striking fish. For sure, Liam and I could catch them when we offered a jig or similar finesse feeding presentation, but when we showed the walleyes a more aggressive reflex movement they went berserk.

The best by far was ripping either a 2 1/2″ (HR6) Acme Hyper-Rattle , (HG6) Hyper-Glide or (RFJ06) Rapala Flat Jig. These lures are better known to walleye anglers as winter ice fishing baits, but when you rip them aggressively in the summer, they cause walleye to unbutton themselves and strike in anger.

When the fish are spread out, I like to put the Ultrex on cruise control and about the #4 – #4 speed setting. Then I flip the lure behind the boat, let it fall to the bottom and hop it up, letting it fall randomly back down on controlled slack line. 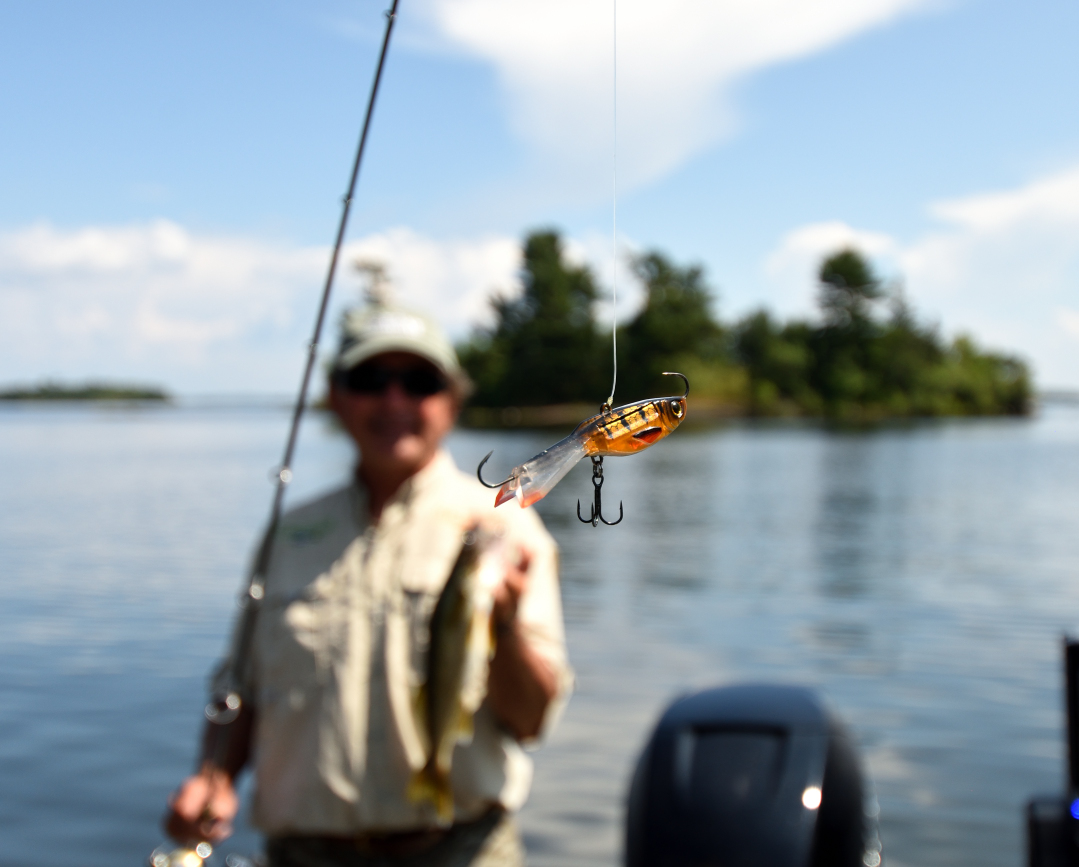 As I have mentioned in the past, you want your lure hitting the bottom frequently. It doesn’t have to be on every snap, but often enough that a walleye can pin the lure to the bottom when it touches down.

I’ve mentioned, also, that I probably stroll the lures this way about 75 per cent of the time, but when I find an isolated school bunched up, like Liam and I did the other day, we cast to them by positioning the boat in slightly deeper water and then sweeping the lure downhill. Whatever you do, don’t fish the reverse way, snapping up the slope. If you do, you’ll snag bottom much more often.

It is also worthwhile spooling one rod with a good 10- to 17-pound test gel spun line like Sufix Nanobrai, then adding a similar strength, 18- to 24-inch monofilament or fluorocarbon leader. But also try using straight monofilament on another set-up. I love this setup with the new Maxima Clear monofilament. The trouble with superline is that you’ll often wrap the limp line around your rod tip after you snap the lure aggressively but it happens much less frequently with mono or fluorocarbon.

Finally, you will surprise yourself at the number of times you will reel in a walleye and the hook will fall out of its mouth in the net. It is a sure sign that the fish are slapping and grabbing it on the bottom, so stick with a 6′ 8″ inch, medium-action spinning rod with a slightly parabolic tip and you keep the fish pinned while you reel them in. It lets you to make walleye hay when the sun shines bright.