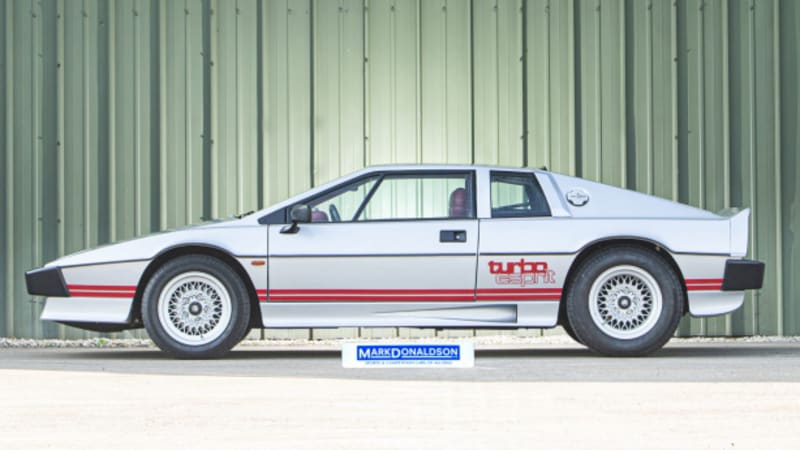 Lotus founder and Chairman Colin Chapman’s former 1981 Turbo Esprit Series 3 sports car is for sale, and it looks fantastic in its metallic silver exterior imprinted with “turbo esprit” on both sides and the bonnet, and contrasting red leather interior.

Built in February 1981 but not registered until August, it was Chapman’s personal car until his death in late 1982, and was also driven at one point by former Lotus Formula One driver Elio de Angelis. Chapman even arranged for British Prime Minister Margaret Thatcher to drive it, at the Norfolk Airport in 1981. Thatcher was quoted in the local paper as saying it was “lovely to drive.” Right, then.

Lotus built the car to Chapman’s specifications, with a lowered and modified suspension, modified bodywork to reduce wind noise, special brake pads and features like power steering and air conditioning that didn’t figure in production models. Chapman, who suffered from hay fever, also had pollen filters installed, plus a roof-mounted Panasonic stereo system. There’s also a specially assembled, blueprinted engine; Esprit Turbos of that model year featured a 2.2-liter turbocharged inline-four that made 210 horsepower and 200 pound-feet of torque. This was also the first Esprit model to be fitted with BBS alloy wheels.

After Chapman’s death, the car was maintained for a few months by the company’s Factory Service Department, and eventually made its way to a succession of private owners. The car is currently on its sixth owner across seven transactions (one ended up re-acquiring the car), but it has just a hair over 11,000 miles on the odometer, with a new clutch slave cylinder and radiator core installed in the past decade.

“This vehicle has lived a pampered existence and is a testament not only to its rich pedigree but to those who have cared for it over the years,” says the listing at Mark Donaldson Ltd., which claims it comes with extensive records. According to Top Gear, the seller is looking to fetch at least 80,000 pounds, or around $97,000.