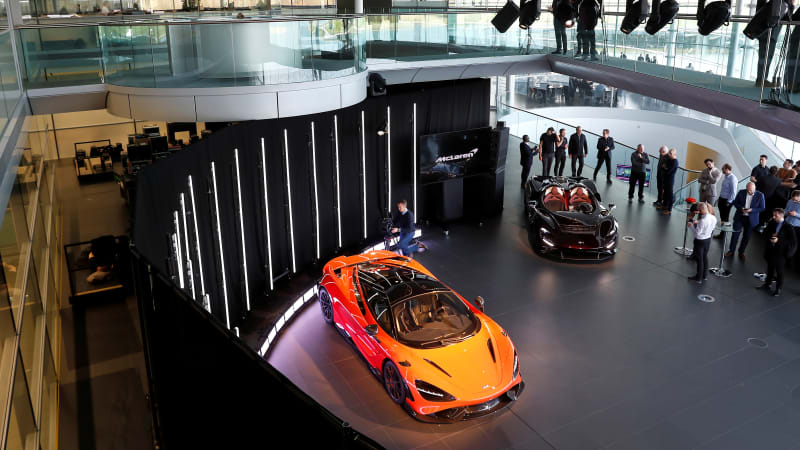 The McLaren 765LT in its debut at the company’s Woking, England, headquarters. / AP

LONDON — McLaren is looking into various funding options to help the sports car maker and Formula One team owner negotiate the coronavirus pandemic, a spokesman said on Thursday.

Sky News reported that British-based McLaren was seeking to raise up to 275 million pounds ($335.61 million) by borrowing against its Woking headquarters and extensive collection of historic racing cars.

It quoted sources as saying McLaren, advised by JP Morgan, could raise the money in the form of new bonds with funding secured from existing or new bondholders.

A request for a 150 million-pound loan from the government was recently rejected, according to media reports.

“Like many other British businesses McLaren has been severely affected by the current pandemic and we are therefore exploring a variety of different funding options to help navigate these short-term business interruptions,” the spokesman said, without giving details.

McLaren were the first Formula One team to furlough staff in April because of the new coronavirus, with drivers Lando Norris and Carlos Sainz joining senior management in taking a pay cut.

The company said then that the temporary three-month wage reduction was part of wider cost-cutting measures due to the impact of the pandemic on its business.

The Formula One season has yet to start, a blow for teams who rely on sponsorship and a share of the sport’s revenues for much of their budgets.

The team announced on Thursday that Australian driver Daniel Ricciardo would be joining in 2021, with Sainz heading to Ferrari.

The McLaren Group, including the luxury carmaker and applied technology arm, employs some 3,700 people with around 850 working for the F1 team.

McLaren has a collection of cars driven by the likes of the late founder Bruce McLaren and Brazilian triple champion Ayrton Senna.

The Formula One team are the second most successful in the sport’s history, after Ferrari in terms of race wins and championships, and gave Mercedes‘ six-times world champion Lewis Hamilton his debut in 2007.