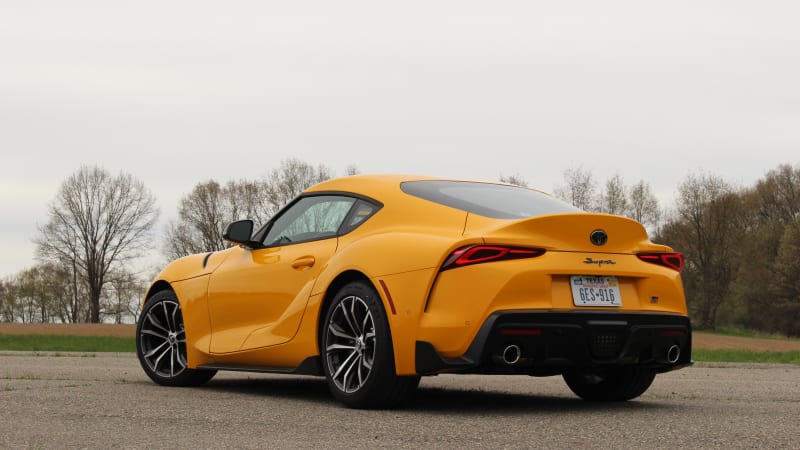 Toyota introduced a new four-cylinder Supra for the 2021 model year and improved the six-cylinder model, too. You can read about what’s new and how the two drive in our First Drive story, but here we’re going to talk about how they sound. The video clip mashup is at the top where you can get a taste of what it’s like to be on the bumper and inside the respective Supras one after another.

The Supra 2.0 is the entry-level option now, and the 2.0-liter turbocharged four-cylinder produces 255 horsepower and 295 pound-feet of torque. We know it’s going to be cheaper, but we’re not sure how much cheaper yet. One big step up from the 2.0 brings us to the 3.0, equipped with a 3.0-liter turbocharged inline-six engine. Toyota added power for 2021, bringing the output up to 382 horsepower and 368 pound-feet of torque — it previously made do with 335 horses and 365 pound-feet of torque. Both engines are pulled directly from BMW and are used in the Supra’s platform mate, the BMW Z4.

BMW inline-sixes are some of the sweetest sounding engines on sale today, and the same is true for the I-6 in the Supra. From the cabin, it’s one of the prettier and also one of the smoothest engine notes you’ll hear in a new car. We asked Toyota if it’s using fake engine noise pumped through the speakers for either engine (as BMW does in the M340i and most of its other cars), and were told that the sound is not augmented or faked in any way. What you’re hearing is real, and we like that. Swapping from Normal into Sport mode opens a valve in the exhaust that bypasses some of the exhaust’s sound-restraining elements. In the I-6, the tone gets deeper, and massively loud pops and bangs start rolling out the tailpipes. It’s hilariously good fun to hear the bangs on the overrun and it just adds to the whole Supra experience. The actual noise emanating from the brushed-finish tailpipes is similarly enchanting. We know that some folks are going to tear the stock exhaust off for an aftermarket system, but this one is already very loud and tuned to please our ears. The mic doesn’t do a great job of picking it up, but each gear change sounds like a tiny explosion from inside the cabin. Things are more sedate in Normal mode, but the exhaust noise never completely fades away, even on the highway. A slight drone can be heard when cruising above 70 mph, which is fine by us. It’s a sports car!

The sound of the 2.0 is a bit of a turn off after hearing the glorious note emitted by the I-6, but the four-cylinder is still quite the loud machine. Toyota uses the same system to switch between sound modes in the 2.0 as it does the 3.0, so swapping into Sport mode instantly turns up the noise by opening a valve in the exhaust system. Even with the exhaust being louder, the sound it makes is more noise than anything. From the outside, the exhaust sounds about the same throughout the rev range, and the pops are rather weak. Those tiny pops make their way into the cabin on occasion, but it’s only a ghost of what the Supra 3.0 or a Veloster N sounds like as the revs fall. Highway cruising is much easier on the ears in the 2.0, though. The revs settle down and you can eat up mile after mile without any droning. Wind noise and tire noise might get to you, but the exhaust won’t.

There’s no surprise ending here: You pay more, you get more, and the I-6 definitely has a lot more to offer from an audio perspective. It’s one of the reasons why we would pony up the extra cash for the 3.0 if both were in reach financially. The 3.0 is a music maker, whereas the 2.0 is more of a noise maker.