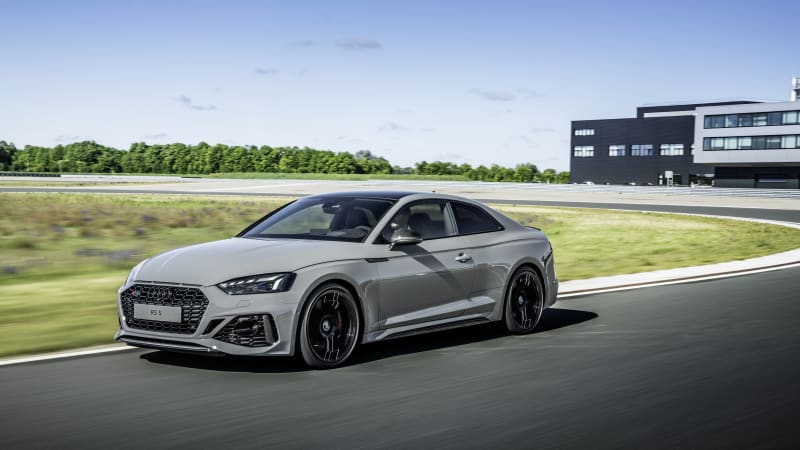 Audi is giving the RS 5 and the RS 5 Sportback a nip-and-tuck for the 2021 model year. It brings a sharper design and better in-car technology, among other improvements. Autoblog had a chat with the company’s marketing boss to find out what product planners hoped to achieve with the facelift, and what’s next for the model.

“The main thing we did was to sharpen the lines and the design. We gave it a totally new front bumper, for example, with a wider and flatter grille. We also added three vents reminiscent of the original Quattro, though the air intakes aren’t functional; they’re filled in for aerodynamic reasons,” explained Rolf Michl, Audi Sport’s head of sales and marketing, in an interview with Autoblog. He also noted there are several new wheel designs available.

The list of extra-cost exterior options again includes a carbon fiber roof panel which shaves about 6.6 pounds from the RS 5. It’s still not available on the four-door Sportback model because Michl’s team sees the coupe as the sportiest of the two body styles. “The Sportback is more of a daily-driver RS,” he clarified.

Audi’s excellent MMI infotainment system makes its way to the RS 5 via a 10.1-inch touchscreen with haptic and acoustic feedback. Although software takes a back seat to horsepower in a car like this, Michl said customers request the latest tech features, and not including them would amount to marketing suicide.

There are no major mechanical modifications, meaning power still comes from a twin-turbocharged, 2.9-liter V6 that sends 450 horsepower and 442 pound-feet of torque to the four wheels via an eight-speed automatic transmission and Audi’s Quattro system. 60% of the engine’s torque gets sent to the rear wheels under normal driving conditions, though that figure can increase to 85% if the front wheels lose traction. Alternatively, the front axle can automatically receive 70% of the V6’s cavalry if Quattro detects the rear wheels are stuck.

Michl argued a mid-cycle facelift is not necessarily an excuse to crank up a car’s power. “We don’t define the evolution of an RS model via [horsepower]. For us, the main thing is to deliver a well-fitting package, and the acceleration and power outputs were already on a good level. We wanted to get it closer to its bigger siblings, like the RS 7 Sportback, from a design standpoint. But, we’re still thinking about some ideas — stay tuned.”

The standard RS 5 is in its second generation, but this is the first time the Sportback model receives a round of updates; the previous-generation A5 Sportback didn’t spawn an RS-badged model. Michl told Autoblog response to the model has been extremely positive, especially in the United States, because it “mixes the emotional shape of a coupe with the versatility of a sedan.” That doesn’t mean the two-door’s days are numbered.

“The coupe is still the sportiest and most emotional variant in our portfolio. We’re seeing demand for SUVs has increased over the past five years, but in our eyes the coupe is still one of the icons because no other body style can embody power in a more design-oriented way. We want to stay within that segment. It’s not just about design; we love the way a coupe handles, thanks in part to the shorter wheelbase,” he affirmed.

Audi will release the updated RS 5 and RS 5 Sportback in the United States for the 2021 model year. Pricing information will published in the weeks leading up to their on-sale date. While the Sportback has been a smash hit, and it sounds like the coupe is here to stay, sun-worshippers waiting for a convertible are out of luck.

“At the moment, we see that with the RS 4 Avant, the RS 5, and the RS 5 Sportback we are matching absolutely every wish, so a convertible is not under discussion right now,” according to Michl.