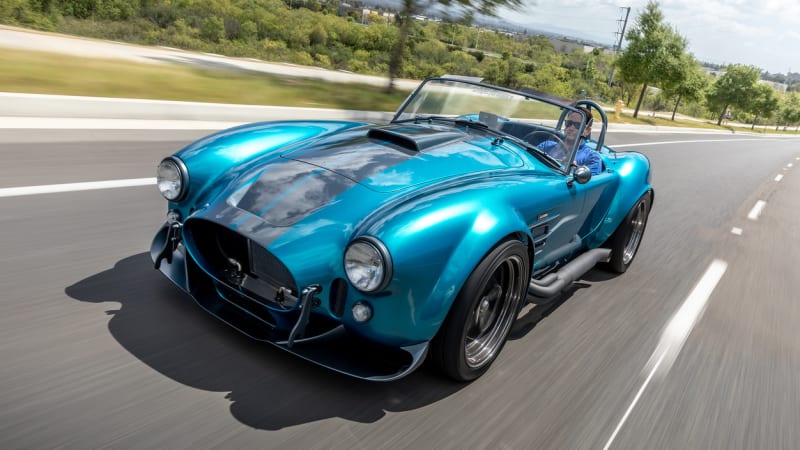 Superformance has made its name with faithful replicas of various ’60s sports cars, most notably the Shelby Cobra. It even has a licensing deal with Shelby. But its latest creation, the MKIII-R, deviates from the formula by blending the classic roadster with modern design cues and aerodynamics.

The design will likely be controversial among Cobra fans, but we find it to be fairly sharp, if a bit fiddly in spots. The major body changes include a deep front splitter, and a real diffuser at the rear bumper. The fenders have new, larger air vents, as does the nose just above the radiator opening. We’re not so sure about the strakes that fit inside the fender vents, though. But if you’re not into them, you can leave them off.

Buyers will be able to customize quite a bit about their MKIII-Rs, in fact. It can be ordered in any color combination, with any kind of finish for the trim. So you’re not restricted to the blue with dark gray stripes and trim of the above car. The interior comes standard with top-stitched leather seats with dual stitching in color-coordinated thread. The center console also comes wrapped in leather, and the upholstery can be customized to your heart’s content.

Under the skin, the Superformance MKIII-R uses the same square-tube-frame chassis you’ll find in other MKIII roadsters. It features independent suspension all around with unequal-length upper and lower control arms and coil springs with Bilstein shocks. A limited-slip differential sits at the back and four-piston front disc brakes and single-piston rear disc brakes are ready to stop the car. Six-piston front calipers are available as an option. As for the engine and transmission, you’ll have to purchase and install them yourself, as the car comes as a rolling chassis fully assembled except those parts. It’s designed to accept a Ford-based V8 with a 5-speed Tremec transmission or four-speed “top-loader” Ford transmission. The blue example above uses a Roush 427-ci V8 making 510 horsepower and 515 pound-feet of torque coupled to a five-speed manual. It weighs just over 2,400 pounds, too. Other Roush engines Superformance recommends can make up to 560 horsepower and 550 pound-feet of torque. Of course, the only limits are your wallet and/or skills when it comes to what powertrain to use.

The Superformance MKIII-R is not cheap, though. The rolling chassis, which is assembled, painted and ready for the engine and transmission, starts at $79,900. That’s without any options such as the aforementioned brakes, push-button start, stereo, air conditioning or even a soft top. But you won’t run into many of these modernized Cobras, since Superformance will only build 20 of them each year.