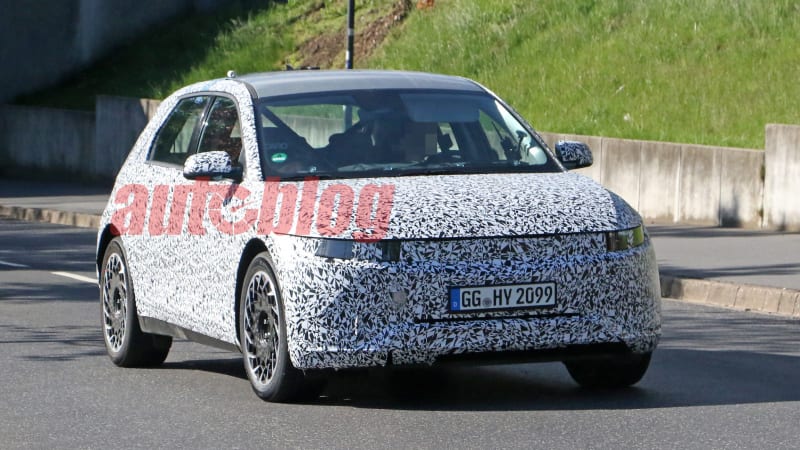 This post has been updated to include fresh photos of the Hyundai 45 EV prototype being tested at the ‘ring.

While the body-hugging vinyl wrap shows off the 45’s pop-out door handles, perhaps the most interesting feature of this particular prototype is its partial roll cage, a hallmark of prototype vehicles expected to get in some laps at the Nürburgring. You’ll never guess what happens next!

Our photographer captured the 45 prototype both on the road and on the famous circuit, where it demonstrated minimal cornering roll in the few photos that depict any weight transfer. This hatch clearly rides like one, rather than behaving like a barely disguised crossover.

When we last saw a Hyundai 45 development vehicle in the wild, it was wearing thick, billowy camouflage that successfully disguised its lines. Now, we can see that the production car is likely to inherit quite a bit of its exterior from the concept car shown in Frankfurt in 2019.

Hyundai has remained mum on its plans for the 45’s powertrain, but we wouldn’t be surprised if is packs an updated version of the Kona Electric‘s 201-horsepower EV system.

It’s unrealistic to expect elements such as the concept’s slick dot-matrix front lighting scheme to make it to production, but its overall shape and wide stance carry over effectively unchanged, which is good news for those who appreciated its unique take on a vaguely Kona-esque design.

Another key element of the 45 concept’s design definitely won’t make it to production: its lounge-like interior. Like many concepts, the 45 was pitched as a vision for an autonomous future. The cabin, done up as living space designed for the time spent when the car is driving itself, is pie-in-the-sky material for current and upcoming electric cars.

Hyundai called the 45’s design strategy “Style Set Free,” but in this case, it appears the company has captured the concept’s signature elements in a way that will pay off when it enters production.