I hadn’t been doing much driving, so the Forester had spent a good chunk of the rainy/snowy spring week relaxing in my driveway. Finally, it came time to pick up a birthday dinner — Indian food, curbside to-go. As soon as I sat down, I noticed something new: a small crack in the windshield. That fix will have to wait until more businesses reopen. As I eased out of my driveway, another issue emerged. I heard what sounded like water sloshing. Braking for the stop sign at the end of my street … yep, definitely liquid. It sounded like it was below or in front of me.

Later, I was parked in the alley behind the restaurant waiting for my order, and I accidentally dropped my phone down into the black hole on the righthand side of my seat. I reached down and groped for it, but instead of a rectangular personal computer, my fingers found nothing but carpet, seemingly soaked to capacity. My first instinct was to use a disinfectant wipe on my wet digits, but then I got out to inspect the underside of my seat from the second row. There was my phone, sitting in a fabric swamp under the seat.

I retrieved it, and, of course, stuck my hand back in the spongy mess for an inspection. The water was cool to the touch. I sniffed my hand and found no noticeable smell. I wiped my hands dry, got my food situated on the passenger seat (seat warmer set on high, of course) and headed home. That night, I told Road Test Editor and fleet manager Zac Palmer about what I found. The next day, there was still no smell, but the water was still pooled, and the Forester got an appointment at the dealership (Dunning Subaru, where I used to take my ’04 WRX — good people). 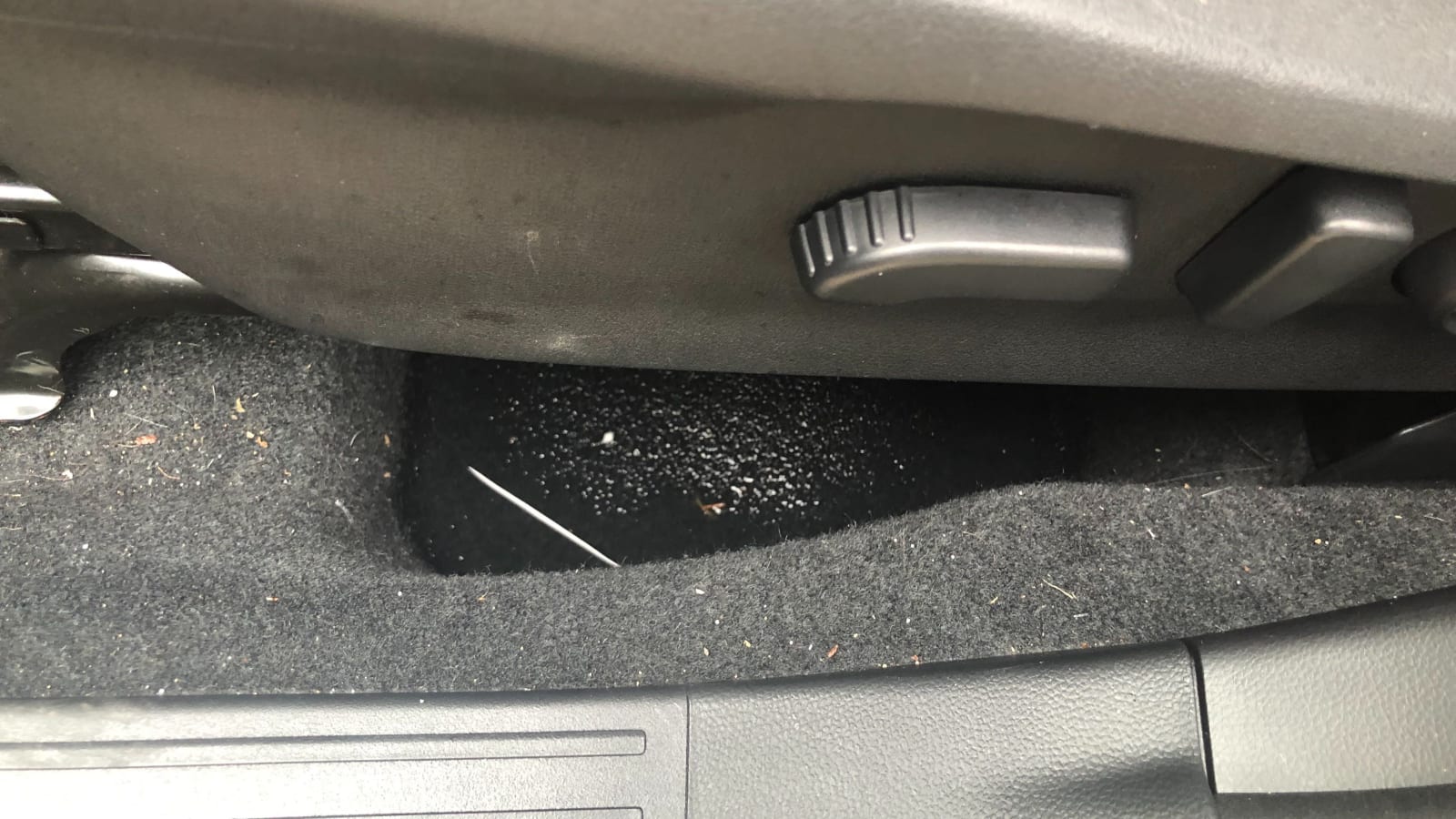 I dropped it off Monday morning, and it spent a full week at the dealership. First, a part had to be ordered (something about a missing grommet; we’d learn more later). Second, the car wasn’t ready until just before closing time on Thursday, and I didn’t have time to pick it up before they closed for the weekend (temporary coronavirus hours) at 3:45 p.m.

“Subaru service told us that it tried to soak up and remove as much of the water as possible,” Zac relayed from Dunning, “but cleaning up the mess isn’t something the service department usually does. Instead, it normally gets sent to a detailing shop that is now closed due to the coronavirus. The dealer apologized over the phone for the incomplete job, and warned us that the carpeting could still feel damp and possibly smell when we pick it up. Not ideal, but a reality anybody with a similar problem will have to live with these days.”

I picked the Forester up on Monday morning, exactly a week after dropping it off (since then, Dunning has added more services to its roster during the COVID outbreak, including a pickup/drop-off service that was previously for medical professionals only). According to the written report, service found a crack in the plastic joint at the bottom of the sunroof drain tube. The piece they replaced is part #65455FL000 — a sunroof drain grommet, as shown in this picture from SubaruPartsDeal.com: 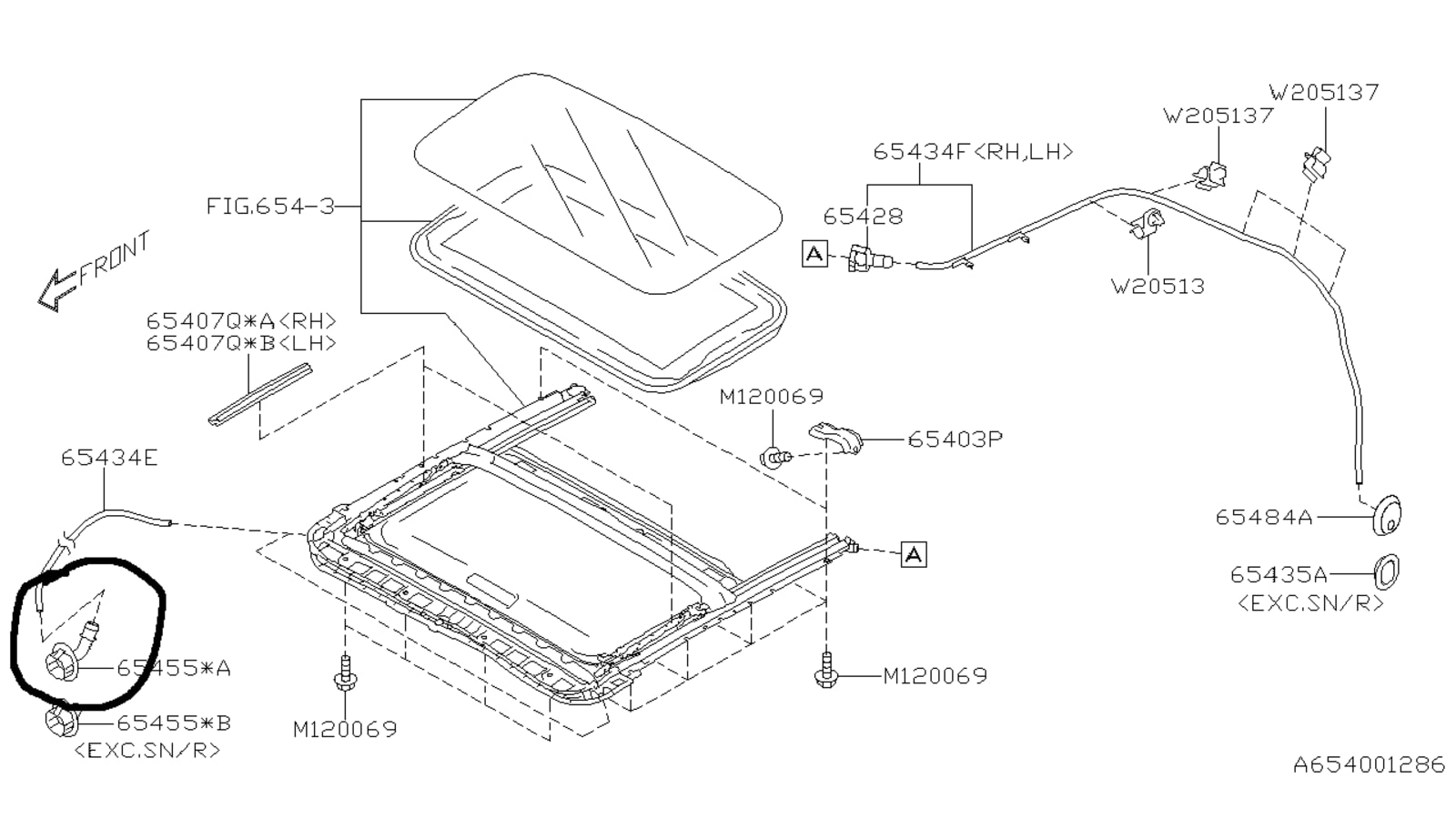 Of course, everything was covered under warranty.

As I drove home, the sloshing noise was completely gone. There was also, thankfully, still no smell at all. I did stick my hand down there and, sure enough, it remained a bit damp. As of Wednesday, a portion of the carpet was still a bit moist, but fading fast. Now if we could just get this crack in the windshield taken care of.