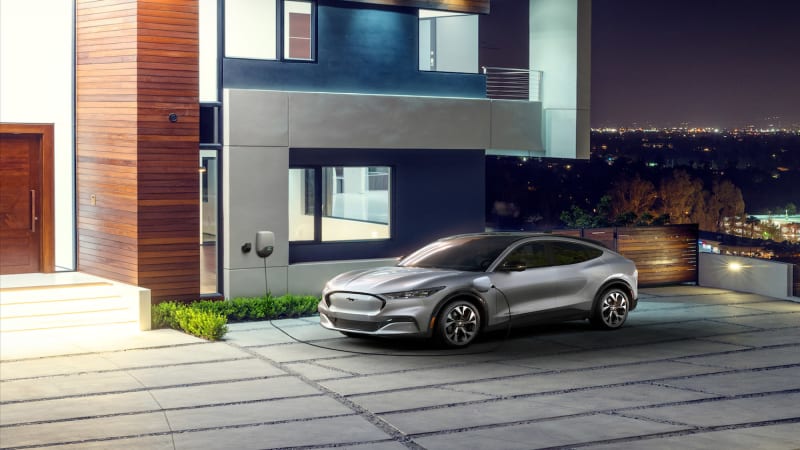 Ford has been working on improvements to the charging infrastructure for its forthcoming Mustang Mach-E electric crossover, and it says its latest tests show that fast-charging range is up by as much as 30%. Meanwhile, owners will be able to access more charging stations across the country.

DC fast charging can now add 14 miles of range in about 10 minutes for a total of 61 miles of range in rear-wheel drive models equipped with the 98.8-kWh extended-range battery, Ford says. In similarly equipped all-wheel-drive versions, a 10-minute fast charge is estimated to deliver 52 miles of driving range. Both RWD and AWD configurations are estimated to charge from 10% to 80% of capacity in 45 minutes on a fast charger. The numbers are all based on the Mustang Mach-E’s 150-kWh maximum fast-charge capability.

Some comparisons are in order. The Audi E-Tron, another electric crossover that offers a similarly sized 95-kWh battery, takes 30 minutes to restore 80% of range on a 150-kWh fast charger and 45 minutes for a full charge. The Porsche Taycan Turbo S can replenish its 93-kWh battery from 8% to 80% in just 20 minutes, and is said to deliver 60 miles of charge in just four minutes courtesy of its 800-volt charging technology. Tesla is also rolling out V3 Supercharging stations, using a 1-megawatt power cabinet supporting peak rates of 250-kWh per car that will juice a Model 3 Long Range to 75 miles in just five minutes.

Standard-range versions of the Mustang Mach-E use a 75.7-kWh battery. Ford says those versions will charge to 46 miles of range in 10 minutes on a fast charger for rear-wheel drive models and 42 miles for AWD variants, with a 38-minute wait to charge them from 10% to 80% capacity.

The new development add to the still-unconfirmed news that the Mustang Mach-E may outperform Ford’s initial expectations for horsepower, torque and kilowatt output.