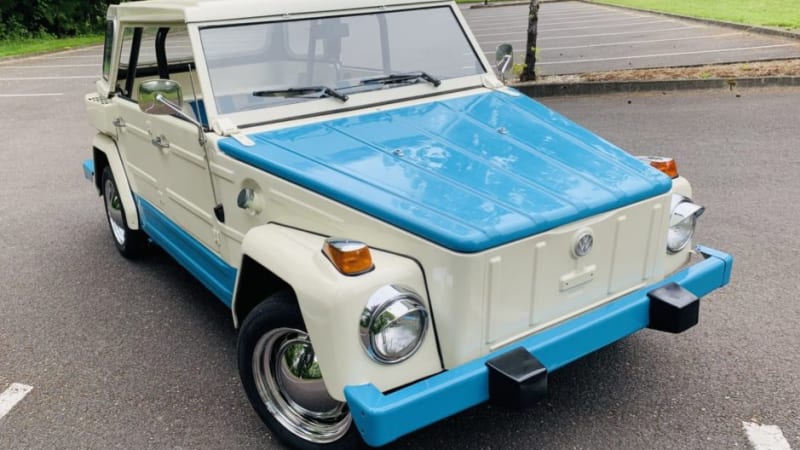 Acapulco may have some image problems today — it was recently named Mexico’s murder capital and the second-deadliest city in the world — but for years this oceanfront resort was a glamorous international playground for jet-set fun-seekers. Celebrities such as Frank Sinatra, Elizabeth Taylor and John Wayne frolicked there, and the 1963 Elvis Presley flick “Fun in Acapulco” bolstered its mystique (although it was actually shot elsewhere). In the 1970s, fun-seekers staying at the Princess Hotel might have been collected from the airport in one of the hotel’s specially modified Volkswagen Thing courtesy vehicles. Their popularity among guests led Volkswagen to build a limited run of similarly turned out Acapulco Things, like this one currently on offer at Bring a Trailer.

The Acapulco Thing was built from May to July 1974 only. All were white with blue accents on the front hood, the rocker panels, the bumpers and the dashboard. The seats were upholstered in a blue-and-white striped fabric, and the same fabric was used for the standard surrey top that was stretched over a metal tube frame. That canvas top, sadly, is missing from this example, with the optional fiberglass hardtop fitted in its place. Removable doors and a fold-down windshield added to the beachy feel. All Things were rear-wheel-drive, although their 8.1 inches of ground clearance provided a modicum of off-pavement capability. Like its siblings, the Acapulco Thing was powered by a rear-mounted air-cooled 1600cc engine paired with a four-speed manual transmission.

This example is said to have a freshly rebuilt engine and rear axles. The interior features wood-slat floor coverings and refurbished seats. The odometer shows 41k miles. The auction is only in its first day and is seeing fast bidding. Apparently, the appeal of a resort ride like this Thing transcends any tarnish suffered by its namesake.